After using it for ~3 months, the recent (all business) trip to Atlanta brought home a BIG problem I’m having with Capture One Pro, and one that may send me back to Lightroom for more operations…

Lest you think that’s an isolated incident, check this:

In that grid, there are pictures from Friday, Saturday, Sunday, Monday, Tuesday, and yesterday, all jumbled up. You can easily see that pictures taken in series are no longer together: the guy sitting and holding his head was next to me on the flight back from Atlanta yesterday. The white splotches on the counter are from the day after I developed the Kentmere 400. Any pictures with the tip of the plane wing pointing to the left are from the flight to Atlanta on Monday; any with the plane wing pointing to the right are from the flight home.

For some very strange reason, Capture One Pro can’t see the dates in pictures from Hipstamatic and (some) other iPhone apps, but other applications can, and rather easily.

The finder can see them, and sort them properly… 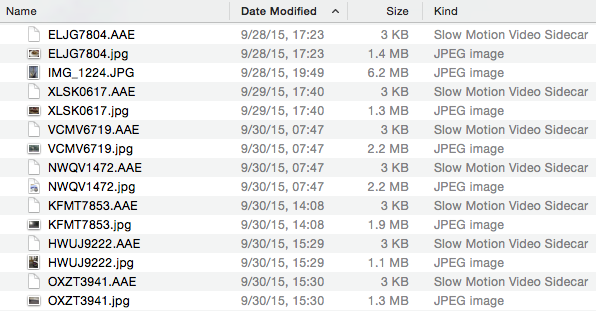 And Lightroom can see and sort them properly…

So why can’t Capture One Pro?

I don’t really know, but one thing I figured out: if I use Lightroom to import from the phone into folders by date and with my rename scheme (that includes the date string at the beginning of the name), then import those files into Capture One Pro, the pictures will be sorted properly, albeit with no date in the metadata field.

Despite being sorted by Date, the pictures remain sorted by name, simply because there is no date for Capture One.

It’s very strange to me, and I can’t seem to find an answer or a reason or a better workaround.

I’m not sure what to do: I could use C1P solely for RAW files, and move all my jpeg, tiff, png, etc. back to Lightroom where they could join their orf and video bretheren. To do that right would require some work, but it wouldn’t be too bad: I could open my old master Lightroom catalog, import everything that it hasn’t seen, then use it to move all the iPhone-created images to a new cataloging scheme in a separate Lightroom catalog, then import the old RAW-only Lightroom catalog to C1P. That would probably be the most thorough—if painfully time consuming and probably overkill—way to do it. I could then use Lightroom for all iPhone stuff and C1P for all RAW stuff. Or I could just continue on with a jumbled mess of pictures in one set of folders and leave the two different applications to access only those pictures they need to see, which is probably the easiest short term, but potentially problematic in the long term.

Allahu Alim. For now, it’s Jummah day and I’m off to the masjid.