Every time I play with darktable, I find something else worth playing with…

This is the third in an ongoing series exploring the photo processing/editing possibilities under Linux. See the first and second parts.

Drag the white and black points around the grid to get some fun split-toning effects. As with many other modules, this would benefit from a bit more precision (and a more powerful computer), but it’s plenty of fun as it is.

The same is true in virtually every other module, and I’ve not seen such extensive use of the scroll wheel in any other image-editing software (or maybe I’ve never paid enough attention). Kudos to the developers.

Flip through these to get a taste of what’s possible:

Edit: After writing the above, I watched some tutorials on darktable, and found that precision is implemented largely via the scrollwheel, which allows for minute adjustments on virtually any slider.

In the color correction module, if you move the scroll wheel while hovering over the toning window, saturation moves in increments of .1 (1/10th); if you hover over the saturation slider, however, the increments go to .01, for much finer control.

In other news, the issue I had with pop-up windows and the main darktable window not fitting the small viewport on this little netbook got fixed in some update sometime last week. Everything now fits nicely in the window, as it should: GoGo open source, which fixed this quickly (for me, anyway) and without having to wait for some corporate juggernaut to decide 1) that the issue is indeed a bug (as opposed to a feature), 2) that something needs to be done about it sooner rather than later, and 3) that it’s worth pushing out a fix sooner rather than later. 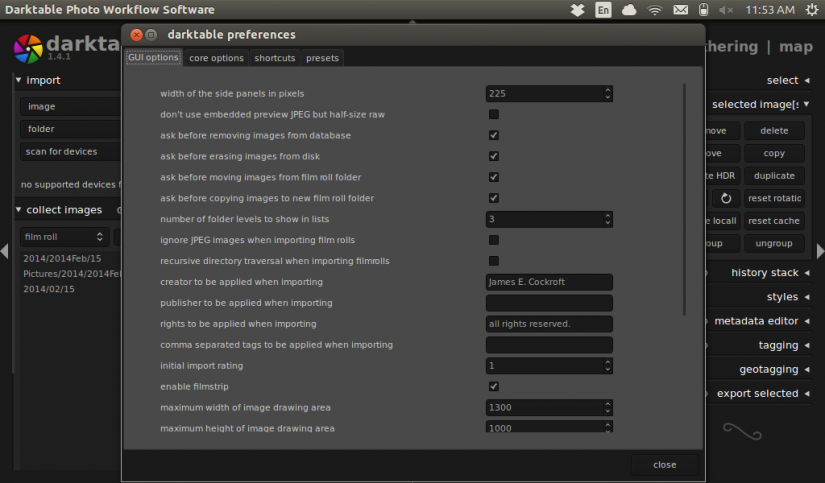