I’ve been bothered by the increasingly high walls around Apple’s garden, as well as the ever decreasing quality and user serviceability of their computers. At first, my thought was to switch to Hackintosh (here in a year or two when upgrade time comes around again: I DO NOT need a new computer just yet), but then the problems with various Apple softwares began…The only real complaint I have is with one small function in the Mail app: in an email, when I right-click a link, the option to ‘open link behind mail’ is presented. This is invaluable when checking mail, for me. In OSX Mavericks, this broke. It’s as if they removed the functionality, but not the option, and the Mail update from October or November 2013 didn’t fix it. Mind you, this is not a huge problem, but when Apple fails to get something like this right, I begin to worry, and I would downgrade to Mountain Lion (or Lion, or Leopard even) if I could.

Anyway, so I decided to start looking around to see if migrating to Linux is an option, and so here we are. (Note that nowhere in the above did Windows *shudder* enter my mind, or present itself as even the slightest option.) Email is easy: switch to browser based email—google supports migrating Apple Mail from the computer to the cloud—or migrate to Thunderbird (similar to mail and highly extensible, if a bit less elegant) or Evolution (close to Outlook in capability, and fairly attractive). Ditto other things I use the computer for:

The only real speedbump/roadblock I have is that my cloud-based backup solution (Backblaze) doesn’t have a Linux client, and my subscription doesn’t run out until March 2015. CrashPlan has a native Linux client though, so no worries there, and with a year or more with BackBlaze, I’ll have plenty of time to get used to Linux and get everything working well before I leave the Appleverse, if I end up doing that at all…

Anyway, as this is ostensibly about testing out photo workflows on Linux, let me get to the darktable.

The interface looks familiar, if not quite as polished as a certain piece of commercial software. This extends from the interface to the options in the import settings. This doesn’t really bother me at all, and I like the glimpses into the code… 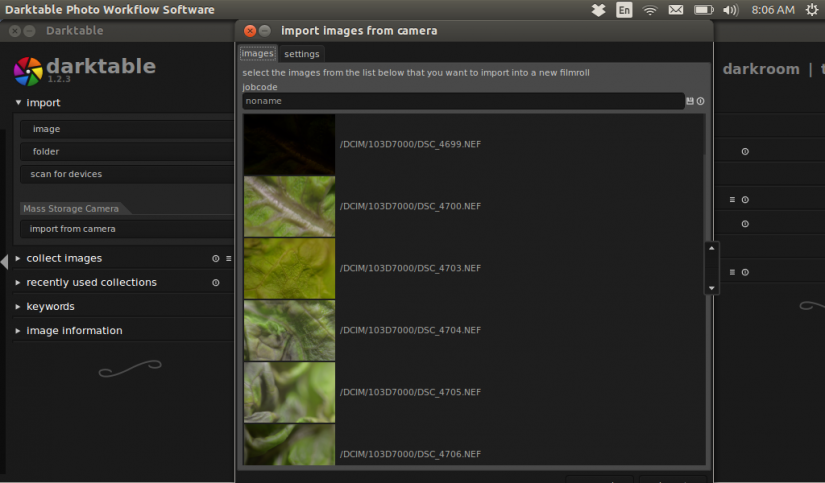 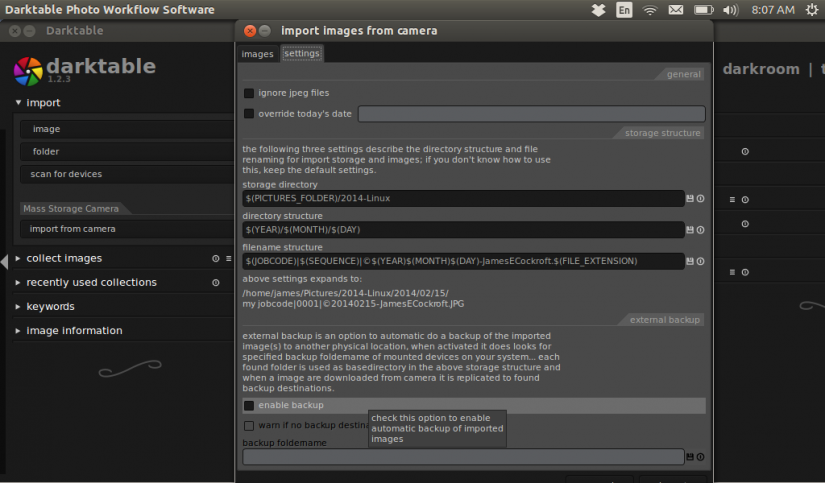 Importing is smooth and easy, though the import window is too long to fit into the netbook’s 1024×600 viewport, and the process does take slightly longer on this little netbook than on the macbook pro. There are two buttons on the bottom: I think the left one is ‘Cancel’ (or similar) and the right one is ‘Ok,’ and I think that’s what happened when I tried them, but Allahu Alim (only God knows, and the developers, and any users with a larger viewport that allows reading the text labels on the buttons…). 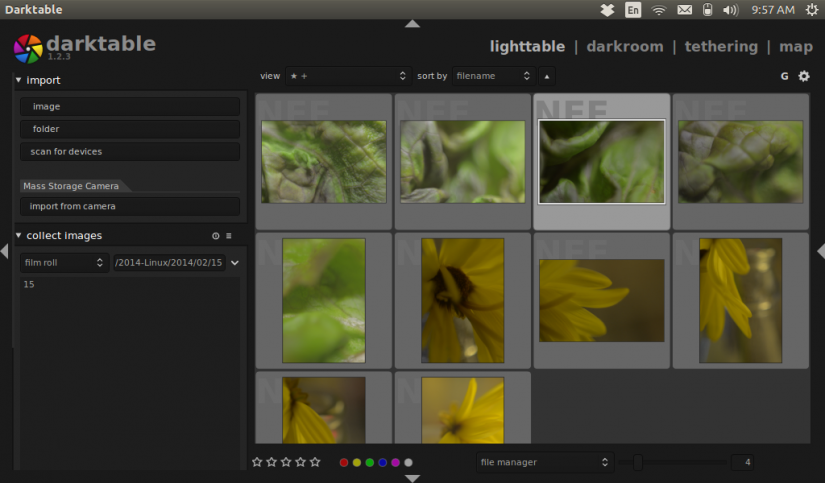 Working with images is much the same as other popular photo-management/editing softwares, with star ratings, flags, etc., and the only issues I’ve run into are

One thing I’d like to see (and it’s probably in the wonderfully expansive options menu, but I’m not going to go looking for it until I complete this post, at least…) is the ability to show the star ratings and flags without hovering over an image, and the ability to toggle this on and off. 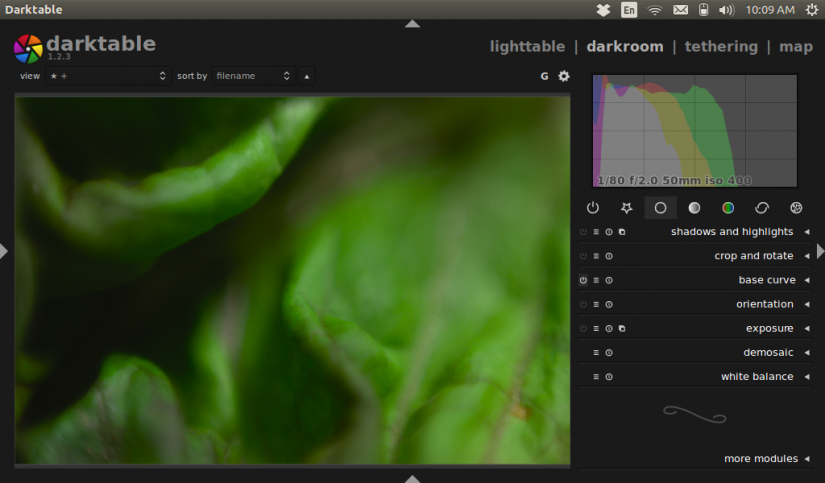 Editing takes place in the darkroom, much like other programs (except for the huge number of options), with sliders to control most of the settings and the added ability to apply the edits in various blend modes. (I haven’t played with this any, and thus don’t have any screenshots or input on it, but it is a neat option, and one that I do play with in Filterstorm for certain effects.)

I’d like to have the ability to input specific values, as the sliders are a bit sticky and imprecise, but the current functionality is mostly sufficient. [EDIT: after watching a couple of Robert Hutton’s excellent darktable screencasts, there is excellent use of the mouse scroll wheel, as well as the ability to just start typing values in many modules and variables. I’ll also note here that there are some excellent resources on the darktable website. Some links are below.] The biggest issue is finding my most-used options: Exposure, highlights, shadows, and crop were easy to find, but saturation was sort of hidden in a panel called ‘Color Correction,’ vibrance was off by default, as was local contrast (aka ‘Clarity’), and I’ve yet to find contrast, but I’m sure it’s somewhere… And it is, but only (seemingly) via the black point (in the exposure module), the levels module (which is a bit fiddly on this netbook), the equalizer panel, and the zone system module. (The last two are likely really groovy if one is running a computer with a decent amount of processor/gpu/RAM power.) 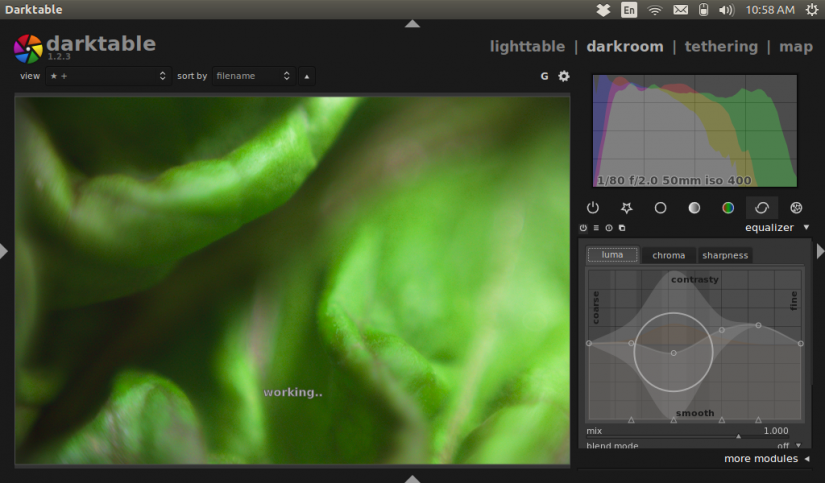 All in all, the editing is slow going due partly to my inexperience, partly to the vast array of choice, and partly due to the organization of the countless options, which doesn’t conform to my normal photo-editing workflow (started in Aperture and carried over, more or less seamlessly, into Lightroom).

For reference, it took me about 2.5 hours to just to edit the two pictures included below, vs the .5-2 minutes I usually spend in Lightroom 5. (Granted, part of the time crunch is due to the underpowered nature of the netbook, and I would likely see a huge increase if I tried this on a decent computer. Allahu Alim, for now.)

Before I get to this week’s pics, here are the biggest problems I’ve run into so far:

And one more thing before I get to the pics: here are a few of useful links:

And now… drumroll… the pics for this Macro Monday: